Late October, we suffered some serious coral losses in the nursery due to a significant amount of sediment getting stirred up, and poured into the ocean after the start of the rainy season.

The Center for Tropical Island Biodiversity Studies (SFS) continued their research at the nursery to help determine the possible cause of the coral losses suffered in the nursery and the artificial reefs during the last two months. They took daily water samples,  recorded temperatures, compared growth rates, and monitored sediment levels. They will be presenting their findings on the second week in December.

Meanwhile, we cloned enough new fragments from tree B-4 to start two new trees and do out-plants on the reef structures at POC and place two new test sites in the waters near the nursery. A total of 254 clones harvested and placed on new nursery trees or ocean out-plants this month. This was from one of the original trees started in September of 2018 and is the second harvest from that tree.

There were 17 new artificial reef structures placed in the POC reef and 8 more are ready to be placed by the middle of December including a creative octopus which will be placed with corals growing on its arms.

This was a good month for public relations. There were 5 different tours conducted at the nursery with a total of 38 visitors. There was a community benefit sale conducted by a local event coordinator to benefit CRP. We were guests of the Bocas Rotary International club and gave a public presentation to explain and promote coral restoration and fisheries recovery. Representatives from MiAMBIENTE regional office visited the nursery to see our progress, learn about our efforts, and see our restoration efforts.

We visited the proposed reef construction site several times during the month to record the progress of out-planted test corals in the area. They are continuing to show good growth rates with no death loss to date.

Water clarity has been unstable throughout the month but is expected this time of year. However, the last week of the month proved to be one of the most sediment-laden water conditions of the year. Temperatures in the water remain uncomfortably high but there does not seem to be major adverse effects in the nursery or the Solarte Bay in general. 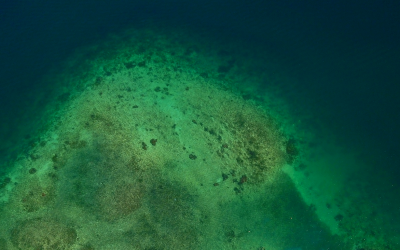