Coral Reefs: Anthropogenic Impacts and Restoration in the Caribbean

Coral Reefs: Anthropogenic Impacts and Restoration in the Caribbean

We are delighted to include this guest post from one of our student research interns, Yana Pikulak. Read her summary, and explore the full study in detail here.

Over the Summer, I was contacted by several students and researchers gathering material and documenting the methods and results of coral reef management programs across the Caribbean. One such researcher has recently published her latest paper and I found it to be very interesting as it focuses on the Caribbean working to save our coral reefs.

11 projects (and 12 individuals) from different locations were surveyed and quantified to depict common trends. A total of 49 programs were found initially that were verifiable programs. 31 operations were contacted and only a portion replied with applicable data. Some of the original 49 were repeat groups of the same parent organization, lacked clear contact information or simply were defunct. Of the 31, some were not directly working with corals, or had other mitigating reasons for not contributing.

Eleven. I thought there were many more of us.

When I began to read the document, it starts with a overview of the issues revolving around coral reef management. Environmental issues, human impacts, disease and many other individual factors. However, in the second portion of this paper, I found the truly interesting material.

Most programs have a single coral nursery site. vulnerable and without any redundancy. A storm, disease outbreak or localized event could spell ruin for these projects.

Projects were split between starting 10+ years ago or in 2015-2016. Strangely constant and surprising that coral restorative projects seem to be lumped into specific time frames.

One factor that was not surprising, but instead confirmed our own experience is that coral nurseries using “tree” structures and employing fragmentation of parent colonies was by far the most common method used by most every project. However, most projects also indicated that they work with another experimental or alternate method of coral management along with their nursery projects.

Staghorn and Elkhorn corals dominated in all aspects for priority in each group interviewed. Additional alternate species were listed, but appear to be unique, experimental projects and not currently part of the overall regional focus for study and application. Additional notation was made to groups using common names of corals compared to use of scientific names. Fully 2/3 of the respondents focused on 2-3 species where more expansive programs had incorporated multiple species of corals. Specific use of scientific naming conventions becoming increasingly useful as more species are added to a management program.

As the paper wraps up, it lists some of the issues facing restorative programs and, no surprise here, funding came out at the top of the list. Like our program, many projects are in need of support and exercise great creativity making due with the limited funding available.

One unexpected issue was also mentioned that deserves further analysis. Groups reporting fraudulent programs offering help and then failing to provide the promised assistance or deceptive presentations that leave the actual projects without real support or the funding implied. The only thing worse than no funding, is lies or stolen funds that were sorely needed. No issue is too desperate to prevent greed.

Human impacts and plastic pollution are also addressed. Global concerns are listed ranging from climate change to volcanoes. As with the opening portion, these sections are tested material that reinforce what we are already experiencing daily here. Things keep getting worse. Temperatures are rising, pollution is spreading. We must change somehow. Become better.

Or these precious gardens of color and life will disappear.

END_OF_DOCUMENT_TOKEN_TO_BE_REPLACED

Our Perspectives  If you have been in the water around corals in Bocas, you have probably seen and would recognize some small outcroppings of...

END_OF_DOCUMENT_TOKEN_TO_BE_REPLACED 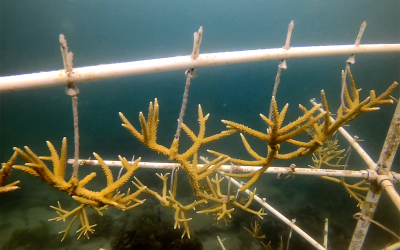 Our Perspectives   Coral losses in the nursery lead to SFS joining us to research the causes Cloning, out-plants & construction updates...